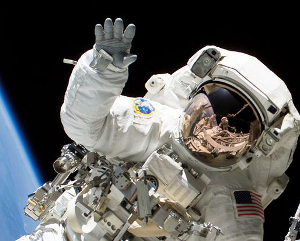 When I was young I had no idea what I wanted to be when I grew up, apart from taller.

I showed a keen interest in science and space exploration at an early age, but sadly my eventual application to astronaut school was rejected, on the grounds of my flat feet and shortsightedness. That, and the complete lack of a science degree, flying experience, courage, or any of the usual qualities they tend to look for in potential astronauts.

I reckon you need a pretty strong stomach to handle several ‘Gs’ in the centrifuge they use to train people for space flight. As a kid I would sometimes get car-sick on trips to the coast, so I soon came to realise I wasn’t one of those guys with the right stuff. In fact based on my career and achievements to date, I have rather more of the wrong stuff.

My other big interest in childhood was human biology, perhaps raising the faint hope with my parents of a career as a doctor or brain surgeon. I did once attempt to perform a partial lobotomy on my middle brother, using a hammer from my Dad’s toolkit. I’m happy to report it was a failure, my brother recovered (mostly) and my career in medicine never went any further.

In school my lack of enthusiasm or ability with mathematics rather held me back, despite my passion for most things sciencey. I eventually had to accept that despite the nickname ‘Boffin,’ I would in fact be better off finding career options less taxing on the old grey matter. Science’s loss was the art world’s gain and so it was that a young, fresh-faced teenager found himself at art school.

It was the late seventies, an exciting time of change in Britain with the old dinosaurs of the music scene being challenged by the young upstarts of punk rock. Within the space of a year or so, huge flared trousers became drainpipe-straight (and customised with safety pins), the hairstyles became shorter and spikier, and so did the music. It was time to discover sex, drugs and rock ‘n’ roll, and we had a lot of fun (and hangovers) in the process. We even went into college occasionally.

Being a sensitive arty type and not the world’s biggest rock ‘n’ roll aficionado, I didn’t fully embrace all the new music right away. Great lyricists or ‘arty’ guitar soundscapes were initially more my cup of tea, in preference to the shouty, manic thrash of most punk bands. But the energy of those times was infectious, and I did soon find some amazing bands and performers who floated my boat (Along the Thames?).

I also had developed a great fondness for reggae and dub music, in no small part thanks to my crazy chum Bruce. I fondly recall Thursday night sessions at London’s famous 100 Club, enjoying the cream of the UK and international reggae and dub scene. Who needed sleep when you had great music, friends, beer and a few, er, pep pills to keep you going?

Like most of British youth at that time, I briefly owned a guitar and had a few weeks of ham-fistedly trying to learn a few chords. I soon gave up and sold it, a wise move considering my crippling shyness and loathing for the spotlight. If I had ever developed any facility with an instrument it would have to have been a giant gong, like the one from the Rank movie organisation, on the grounds I could have hidden behind it.

Once again humanity was robbed of ever discovering my unique talents. On leaving art school, I did what most former art students do and found a crappy job (the first of many) to finance my enthusiasm for seeing bands and drinking alcohol.

A few decades have passed and now I don’t see quite so many live bands, but my natural aptitude for drinking alcohol is still with me. I try not to overdo things, limiting my consumption to the recommended allowance. Sadly the poor maths often gets the better of me and I confuse units per week with units per day. I’ll get the hang of it one day if it kills me..

I’ve had many jobs over the years, including working with kids (and also adults) with disabilities and learning disabilities, and then later in community mental health care projects. I also did admin jobs in offices, temp jobs in factories and performed various other scintillating roles before I eventually became self-employed in the emerging field of web design and development.

I met many amazing people from all walks of life and made some great friends, including the woman who has been by my side for the past twenty five years. One of these days I must ask her who she is and why she keeps following me around.

When you reach middle age (and then go sailing past) you start to come to terms with the fact that many of your youthful plans and dreams will never come to pass. I’m clearly never going to appear headlining the Glastonbury music festival, even if I start practising the gong religiously. I’m also unlikely to get a call from NASA, telling me they’ve relaxed the entry requirements for astronauts and now even yellow-bellied, under-educated old gits can have a go.

I had briefly entertained the notion of doing an online course in brain surgery, but with my allergies I would hate to sneeze and accidentally lop off an important bit of someone’s pinkish-grey matter.

I still harbour one or two remaining ambitions: I haven’t totally given up hope on my application to join the Slovakian women’s synchronised swimming team, and I also try to keep a positive outlook on a nomination for the Nobel peace prize. After all, if I had gone into a music career all that practice on a giant gong would not have been very pleasant for the neighbours.

If there is a multiverse, I like to imagine that out there, somewhere, there’s an alternative me who has achieved much more. A me that is a beloved legend of the music scene, or an eminent neurosurgeon with a side gig as a stand-up comedian.

But most of all I like to hope there is a me who made it into space. A guy who built a career out of being smart, brave and pushing the boundaries of human achievement. Someone who boldly went where no man had gone before.

I’ll just have to pin my hopes on joining the Slovakian women’s synchronised swimming team. I do hope the falsies stay on underwater.