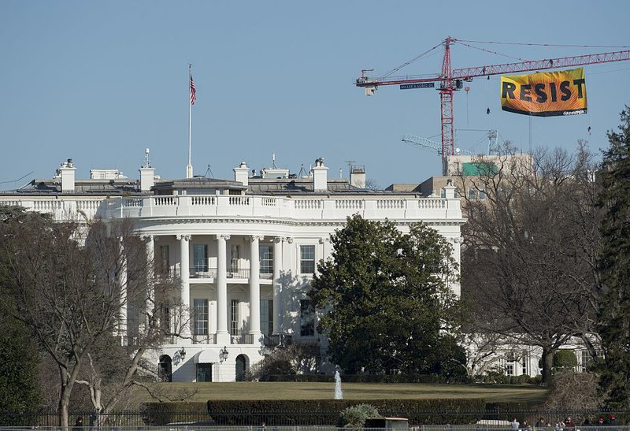 It is 2021 and the Earth is a smouldering ruin. What little remains of human civilization exists in small pockets, stretched across the scarred and barren wastelands of our once mighty cities. Starving, diseased and horribly disfigured, they fight giant rats and rabid wild dogs over the last of the McDonalds‘ still-fresh-looking burger patties.

The apocalypse, so often predicted, had finally come to pass on a date nobody had expected: a rather ordinary Tuesday in February. And it was all down to the chaotic results of the flapping of a butterfly’s wing in an Amazonian rain forest.

Of course that’s not true at all. It was in fact largely brought about by the actions of one man. A despicable orange goblin, with tiny hands and a massive ego. A misogynist, racist, science-denying, sociopathic TV celebrity, with the demeanour and appearance of a sleazy used-car salesman. Donny Trumpet, billionaire sex pest and reality-avoider, had concocted the ultimate con, with the help of his old chum, Vlad ‘The Impaler’ Putanski. And, it was said, it had been partly inspired by a much beloved Christmas movie starring Eddie Murphy.

Of course we cannot be 100% certain that Trumpageddon, as some had christened humanity’s demise, was the direct result of two sleaze-balls watching a movie (mainly to leer at it’s female star’s breasts, it should be noted). They may have come up with the idea quite independently. But we do know a bet was made. And that small wager almost certainly sealed the fate of the entire human race.

The story goes that Donny had bet one dollar that he could con his way into the most important job in America, by “scamming the gullible saps”, as he’d put it. Furthermore, Donny had promised that once in power, he could fill all the important government posts with people so unsuitable, that the population would start to think that they had fallen into some parallel dimension, a sort of reality TV show based on the movie Idiocracy. Each day they would wake up and find that president Trumpet had appointed another nutjob, illiterate or right-wing extremist. “I could appoint a penguin to head the state department” he joked, “And on its first day in the job, staff would hold meetings and ask its opinion and try to get it to take calls or sign papers. They’d be so spaced-out they’d start to believe it was normal!”

The two men had sat in an upscale eatery in Moscow in early 2016, laughing and drinking insanely expensive wines and spirits long into the night. Grabbing and leering at passing waitresses, they were unaware of the unlisted ingredients that had found their way into their evening’s soup, salad dressing and pasta sauce. The staff laughed long and hard after the pair stumbled belching, farting and vomiting into the cold night air and were whisked away in Limousines. But Trumpet later bought the place and so it had quickly fallen into bankruptcy, making them all unemployed. It was to become a familiar story.

Within a few short months he’d won his bet, and had become the 45th President of the United States, much to the world’s collective horror.

At first the insane pronouncements of President Trumpet and his cabinet of loons had seemed simply hateful, dangerous and deeply immoral. But soon they had begun to take on a more psychotic quality. His bloated, gurning orange face would turn dark red with rage as the Saturday Night Live team and numerous online satirists hilariously mocked his administration’s every idiotic move. So he had bought all the networks and broadcast flattering documentaries and puff pieces made by his own team, 24/7. He also bought Twitter and all the major news outlets and social media channels, largely bankrupting the US economy in the process. Every channel, every poster and every public space soon featured his ridiculous visage. Books were burned, dissidents locked up and dissent crushed by his hyper-militarised Trump forces. The right and the left fought bitterly, blaming each other for their nation’s collapse. He had learned much from his old Russian drinking buddy.

But it was his provocations with the Chinese and others across the world that finally ended our oh-so-brief tenure as the dominant species on planet Earth. Forming an unlikely alliance, eastern, middle-eastern and even a few western nations demanded Trumpet removed his fleets and missiles and stop his hateful warmongering and insanity, or else. As the world held its breath, Trumpet, too stupid to see the danger, delivered a final fateful ‘screw you!’, expecting them to roll-over en masse. But after almost four years of his shit, people had had enough. And when those red buttons were pushed across the world, some people met their fate with a sigh of relief. For they’d never again have to watch that ridiculous tinted-tyrant on their TV and internet channels and mobile devices. Or follow his mad dictates, or cower in fear from his jackbooted army of thugs.

So the world’s population had wailed and wept, embraced each other, said prayers or partied, cursing the orange demon’s name to hell. And quite a few spent their last few minutes alive wondering what if things had turned out differently? What if that nice Bernard Sanderson had been elected instead?

And then the world had turned to ashes.

Trumpet had fled to his luxury bunker, where he dined on lavish meals with increasingly odd tasting sauces. But the staff soon rebelled, and the head chef fed him to the dog she had rescued, a rather cute chihuahua called Enrique. And they all left the bunker and went back to what was left of their homes to live out their last weeks away from the foul stench of the Cheeto Mussolini.

Somewhere, in some far-off and unfathomable dimension, a race of extraordinary but rather annoyed beings said something to the effect of “Oh for fuck’s sake”. And after making some tweaks and adjustments, re-started the simulation. And several thousands of millennia later, a race of insects began to use simple tools and a more complex form of language. While the apes continued to fling shit and fight over bananas.