After another depressing week of news and a Danish Summer that is currently awol, I thought I’d look for some things to cheer about. It wasn’t easy.

As the good ship UK begins to slowly sink beneath the icy, post-Brexit waves, the news from the rest of Europe is a little more heartening. A number of countries, including Denmark, are seeing an upswing in support for the EU. Polls suggest there is less enthusiasm for a referendum here than pre-Brexit and a more EU-friendly vibe among the people. Hopefully the referendum shock will make other euro-sceptic members see sense and pull back from the brink of following the UK to Davy Jones locker.

With the surge in racist attacks in the UK and the awful violence in the US, it’s been good to see citizens responding with gestures of kindness and solidarity. If every cloud has a silver lining, or at least every fifth cloud, we may see a great swell of unity and of people finally waking up to the fact that black lives matter, that immigrants lives matter and that no life is worth less because of where you were born, or because of some minor variations in hair or skin pigmentation. We are all in this together.

I suspect that it will be a long time before the dream of a united world without borders or obsessive nationalism becomes a possibility. We seem to cling to our various forms of tribalism like lichen to rocks, and it is doing us no favours. I’d like to see the introduction of a new passport that says ‘World citizen’ and the details of place of birth is somewhere in the small print. For now a distant dream.

Anyway, a roundup of some cheering news as promised.

NASA’s Juno probe has successfully made it into orbit around the planet Jupiter. It’s a pity it wasn’t Uranus as this offers far more comic possibilities, but you can’t win them all. So far it has confirmed that Jupiter is big, has some very nice moons, but no sign of any space bars full of colourful alien characters, or hidden Death stars.

In the US, Ken Ham’s ‘life-size’ Noah’s Ark ‘replica’ and museum opened, much to the

amusement of pretty much everyone who is not a creationist bible-basher. The 500 foot craft will sadly not be sailing anywhere and instead will offer visitors a chance to discover if the US is simultaneously the world’s most technically advanced nation, and also the most backward and ill-educated. For those complaining that space exploration is expensive, one wonders if the $100 million spent on this biblical fairy tale could have been put to better use. May the farce be with you.

Tory leadership hopefuls Theresa May and Angela Leadsom have surprised many commentators by agreeing to a five round cage fight at UFC 201 to settle the leadership challenge. Given the recent disappointments from UFC events, this could really boost their fortunes and perhaps herald a whole new era where politics is given the type of honest arena it truly deserves. The winner is rumoured to be offered a contract with the UFC and a chance to compete for the hamsterweight title early next year.

We had the usual dismal results from the football, and now Britain holds its breath at Wimbledon as some more overpaid sports celebs hit a ball over a net while posh folks eat strawberries. Well not just posh folks, my pal Keir was there too.

Fortunately for me the result will make little difference, as I don’t give two hoots about such activities and would rather watch paint dry than most of these dull and over-hyped sporting events.

Give me chessboxing any day, or the UK’s Cotswold Olimpics, featuring the shin-kicking championships. 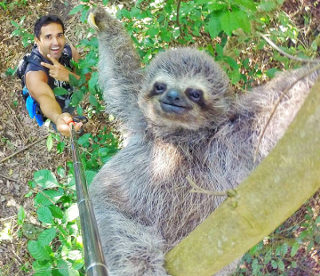 And finally here, thanks to adventure tour guide Marcelo Sueth, is the best selfie / animal pic of the week.

Did you see any cheering news stories this week? Let me know in the comments.