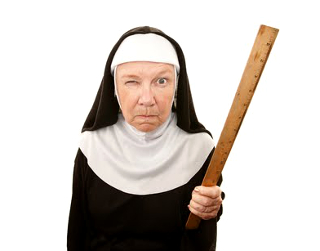 For people of a certain age, being disciplined invokes a trip to the headmaster for punishment, while for others something rather more kinky. Or perhaps both.

But I will leave any salacious discussions of corporal punishment or saucy S&M shenanigans for another time. Here I want to try and get to the bottom of the mental discipline we apply, or fail to apply to ourselves.

Self discipline: The ability to control one’s feelings and overcome one’s weaknesses. OED

Self-discipline seems to be fundamental to success. Pretty much any type of challenging endeavour requires it, unless you join the military services and let someone else impose their discipline upon you.

I can see the potential advantages of having such a well-structured life: a clear set of rules and goals, strong motivators and the fellowship of comrades in arms. Not to mention the simplicity of wardrobe choices. But personally I would rather be skinned alive, lightly seasoned and fed to wolves than submit to such an authoritarian way of living.

Some of us may have rebelled at an early age against the harsh tyranny of parental discipline. The draconian rules that sent us to bed at a reasonable hour, or banned us from attempting crude surgical procedures on siblings seemed outrageous to our young and unformed minds. It’s only once we reach adulthood that we begin to understand the need for such rules and boundaries.

Although unconventional in some ways, I wouldn’t claim to be a rebel by any stretch of the imagination. Yes, I do like to wear a sombrero during the Christmas holidays, and eat my soup with chopsticks, but overall I probably conform as much as the next person.

Like so many of us, I am drawn to certain rebels and misfits. They are the ultimate symbols of a type of disciplined uniqueness. They suggest it is okay to be different, if you have developed your gifts or personal qualities in the service of some greater cause. It may be a political fight, or simply the goal of achieving excellence in your field. But whatever they achieved, they usually did it without an authority figure barking orders in their ears.

Rebels certainly come in many forms. From Leonardo Da Vinci to Rosa Parks, Frida Khalo to Salvador Dali, people have made their mark though dedication, bravery or having interesting facial hair. Or in some cases all three. If they had anything in common, it may be the ability to do what was required to get where they wanted to go.

If Ghandi had thought, I really should lead a peaceful revolt against oppression, but I’d rather stay home and play Kerplunk, his name might be unknown to us.

If Michelangelo hadn’t slaved with chisel or brushes for countless hours to perfect his technique, preferring to drink Chianti and laugh at geese, there’d be no Sistine Chapel ceiling and an empty space where the statue of David now stands.

Whether you call it Buddhism or another religion, self-discipline, that’s important. Self-discipline with awareness of consequences. Dalai Lama

One possible solution is to allow ourselves to be cajoled or bullied in a carrot and stick type scenario. The promise of a nice reward for doing some important task, combined with the threat of ghastly consequences, may be enough to get us moving.

Creating a simple framework may be useful, one that uses the power of habit to get things done. Setting a specific time of the day for a task or an exercise period can be very effective. Creating the right conditions also helps: removing distractions (bye bye Internet connection and social media) and finding a conducive space to work. Even what you wear can help trigger the positive mindset you need to get busy. Some don a particular item of clothing. I find a snorkel and flippers is just the thing to get me in the mood for a writing session. Although the mask does tend to steam up.

Of course even the most tried and tested strategy is no match for the sheer bloody-mindedness of a world-class procrastinator like me. I could be on fire and still find an excuse to check Facebook, email and the weather report before deciding on my best course of action.

I would love to blame it on my genes, or the harsh environment a child faces growing up poor in the swamplands of Louisiana. But since my parents don’t seem to have such issues, and I actually grew up relatively comfortable in southern England, this excuse just won’t wash.

With self-discipline most anything is possible. Theodore Roosevelt

There are thousands of books, websites and blogs devoted to helping us become more disciplined in our habits. From utilising the Eat the frog principle or the 80/20 rule, to setting a timer or superglueing yourself to your chair, the internet is overflowing with tips and advice.

I suspect one day soon science may provide the answer to the discipline problem in the form of a pill. You’ll pop one first thing and sail through the day firing on all cylinders. This could create a society of super-achievers, banging out best-sellers, acquiring multiple languages and dreaming up six disruptive startups, all before breakfast. Scary.

In the meantime I may have to hire a shouty Sergeant Major to help me get things done. Or maybe a stern woman with a whip might boost my chances of success. It seems to work pretty well for Tory politicians.

12 thoughts on “Fifty shades of great”