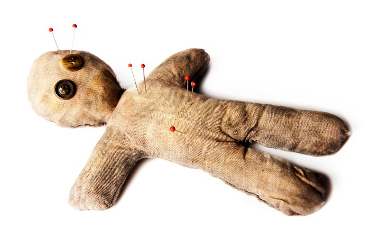 Woo-woo:
adj. concerned with emotions, mysticism, or spiritualism; other than rational or scientific; mysterious; new agey. Also n., a person who has mystical or new age beliefs.

OK, that’s a dictionary definition of the term Woo-woo (or simply Woo) but what’s it all about and is it contagious?

Woo has been with us in one form or another for a very long time. Ever since the first snake-oil salesman showed up claiming to cure your herpes/headache/hemorrhoids with a bottle of his magic tonic (Today only – buy one get one free!) there have always been those only too happy to provide the ‘solution’ for certain basic human needs and desires, for a price. What desires are those I hear a throng of at least four voices enquire earnestly? Well I’d say it mainly comes down to our craving for easy answers or instant cures for what ails us.

Whether it’s crystal-healing or reading tea leaves, astrology or lucky charms, most people have a tendency to allow their emotions and imaginations to rule over their critical faculties. It doesn’t help that critical thinking is not generally taught in schools and most young minds are exposed to a wide variety of religious or non-rational ideas long before their brains are capable of distinguishing facts from fairy tales.

A big challenge for those of us wishing for a more rational society is that the human mind is not by default tuned for rationality, logic or scepticism. Our minds are highly receptive to stories, powerful narratives that make compelling colourful tales seem believable, even when a more logical analysis would render them fantastical fictions. Big-foot, alien abductions or the Loch Ness monster may be just stories, but they gain traction in our minds in ways that scientific scepticism and logic find hard to counter.

Looked at from one perspective (a slightly cynical atheist curmudgeon’s perhaps..) religion is the ultimate woo-woo. It is the supreme blend of purest snake oil, curer of all ills, solver of all problems and righter of all wrongs. It claims to provide exactly what every buyer needs. Of course the sellers will always say only their blend is the real deal, those other blends are clearly fakes. Here comes the collection plate, all cheques and credit cards accepted.

The core narratives of religion that help provide many with a sense of meaning, comfort and hope, are rarely judged by the same criteria as any other stories. If you arrive in town claiming you flew in on an invisible magic unicorn, folks tend to adopt a somewhat sceptical stance. You may encounter laughter, mockery or even end up in a locked room with unusually thick wallpaper. But if the fundamental belief system you were raised in tells you its tenets were beamed directly into the mind of your most holy prophet, as he flew into town on a invisible magic unicorn, people will generally give it the benefit of the doubt. Go figure, as they say.

We tend to believe what suits us and reject the more likely but less comforting truths. I might want to believe I am one day going to have the book sales of JK Rowling, the mind of Stephen Hawking and the animal magnetism of a young Brando. This is not at all realistic, but if I find a book in the self-help section tomorrow that promises all this and more,  has really good reviews on the back cover and says its methods are all rigorously scientific, I may just be tempted to buy me some of that snake-oil.

One major problem for humanity is that the rather credulous nature of the human mind leaves us open to exploitation by those who would seek power, wealth or prestige. Whether it’s prophets or profits, there are always opportunities for the cunning or the confidently deluded to hoodwink us into believing them. From ancient beliefs in magic, curses and demonic possession, to modern-day cults like Scientology, people are often only too willing to open their minds, their hearts and their wallets to the woo.

I’m all for freedom of personal belief, providing your beliefs do not cause you to infringe anyone else’s basic human rights. What I am much less tolerant of is ignorance. This is the 21st century and we ought by now to be a lot less gullible, less willing to be hoodwinked by a tall tale and a smooth patter. It’s high time we learned to ask questions, check sources and take people’s claims with healthy pinch of sceptical salt. As Carl Sagan memorably put it: ‘Extraordinary claims require extraordinary evidence.’  If something sounds too good to be true, it usually is.

If you feel like hedging your bets, you could always follow in the footsteps of the famous Danish physicist Niels Bohr, who was supposed to have been posed the following question about the ‘lucky’ horseshoe mounted over his door:

“Do you, a sober man dedicated to science, really believe in that superstition?”

“Of course not,” replied Bohr, “but I’ve been told that it’s supposed to be lucky, whether you believe in it or not.”

For many of us, battling the woo of anti-science and superstition feels like an on-going daily task, and a Sisyphean one to be sure. But we all need something to believe in, and nobody is completely free from the many cognitive biases to which we are all prone. I know this, just as a wise old gypsy once predicted I would.

14 thoughts on “From voodoo to woo-woo”