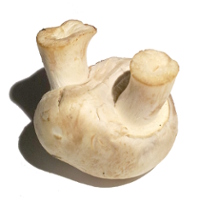 So I found a pair of conjoined twin mushrooms, sitting among their more regular siblings in a box we purchased recently. Its twin stalks almost reminds one of the horns of Beelzebub and of course it also has disturbing connotations of mushroom clouds..  I wondered idly if this might be taken as a sign of a forthcoming apocalypse, the ‘end of days’ regularly mis-predicted by religious ‘prophets’. Of course if they make the claim often enough, they might get it right eventually.

On its own, fused fungi siblings may seem quite trivial, just a random mutation resulting in a curious single entity. But no, this is the latest in a series of portents that simply cannot be ignored. There was the single red glove, floating ominously in a small pond close to my home, that seemed to be pointing up to the sky. Then there was the tennis ball that mysteriously found its way into our little garden some months ago. The clincher, the thing that seemed to put it all beyond any reasonable doubt, must be the sighting of a strange cloud formation that appeared to be a terrifying dragon about to consume the world, as foretold in the book of Rolf.*

How did this mysterious mushroom fit into the picture? What were the unfathomable forces of fate, that spin our destinies like so many wobbling plates on poles, trying to tell us? It all became clear in a Holmes-like moment of insight. Perhaps mighty Odin, in his infinite wisdom, had sent these signs to warn us of impending doom. The red glove, tennis ball, mushroom and the dragon-shaped cloud, together spelled out the only hope for humankind: we must send all Earth’s twins to Mars, the red planet as soon as possible. Once there, they must setup a tennis academy and begin cultivating mushrooms on a huge scale.

Naturally my partner and I would have to accompany them to help ensure the success of the mission. For those unfortunates back on Earth, it would soon be too late. Ragnarok might be upon them any day and we could only hope that all those we love would be spared the dragon’s flames.

Addendum – our application to join the Mars colony mission was turned down. It seems the committee felt the need for a twins-based tennis academy and mushroom farm was not a major priority, the short-sighted fools. Looks like we’ll just have to sit tight on Earth with everyone else and hope for the best. May the blessings of Odin be upon us all.

*My knowledge of the Bible is a little hazy, maybe it was the book of Eric?

One thought on “Mutant mushrooms and the end of days”